There are a couple of things that usually apply to the annual Club Sailing Day. The first is the weather. It’s almost always good, a day for sunglasses and T shirts, served with a balmy breeze.

There is also a standing joke amongst the regulars that ‘Something Special’ happens – a fly past of fighter jets maybe. Or making our way up Southampton Water alongside Queen Mary 2, as she departs for the other side of the World.

So, the ominous looking clouds that hung over us at our assembly for this year’s outing were something of a departure. What to wear? The optimists (or the lazy) among us munched silently on their bacon rolls. The others scrambled for the wet weather gear and anything else to keep warm and dry. It was ‘the others’ that were proven right. As we cast off from the pontoon, the cloud emptied itself on us; the optimists scurried below for a towel and a search for the right gear.

But ‘the others’ weren’t wrong for long. Once out on the Solent the sun shone between the clouds and a gusty 12-20 knot Westerly breeze ensured good progress and a lot of fun, with those who wanted to having time on the helm as we tacked our way Westwards.

It was when we were halfway to our Yarmouth destination that the ‘Something Special’ happened. It was preluded by the approach of the Coastguard Air Sea Rescue helicopter. It hovered off our port (left) side, as if just watching us. But just as we wondered what we had done to deserve the entertainment it peeled off in the opposite direction. But then, it returned, this time hovering much closer to and often right over the boat. Then the call came on the radio – a request from the pilot asking for permission to drop a man on deck.

Ten minutes later, after one aborted attempt, we were hauling a paramedic aboard on a dropped line. He explained they were training a new pilot. A few hellos and a short rest and he was off again, leaving us mightily impressed at the way in which the pilot had consistently maintained our speed of 6.5 knots, right above our mast. And in a gusty wind, without creating any downwash on the boat. How difficult, we realised, it would be to do that in the English Channel at night in a big sea. *

And so, to lunch at the Hut, surely the best waterside restaurant on the Isle of Wight at the moment. Much fresh fish, white wine and good banter set us up for a wonderful ‘downwind’ return leg. Even the rain held off for us.

I wonder what the ‘Something Special’ will be next year.

*It is not unusual for Air Sea Rescue to undertake a training exercise in this way, only to experience one if you are on a yacht. As well as teaching the helicopter crew it’s a very useful way of training yachtsman, who do not get the opportunity of a practical lesson when learning. If it happens when on a yacht, permission is always granted. 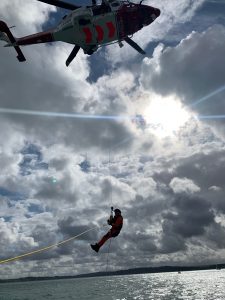 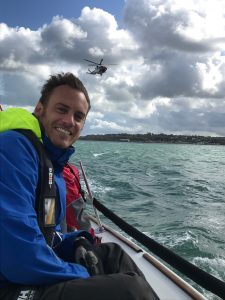 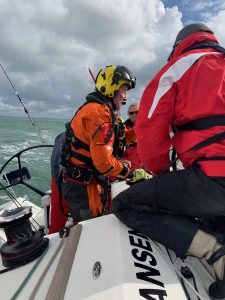